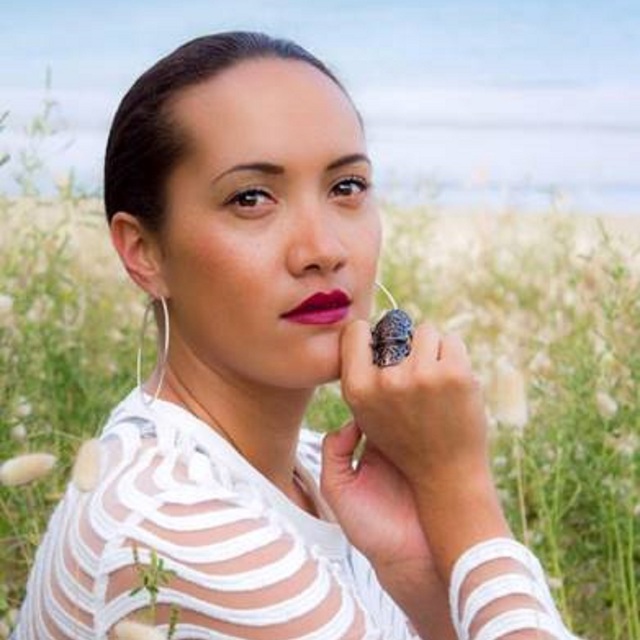 Born and raised in Maungatapu, Tauranga, fell into music at a young age after joining the church choir based out of her Marae. Kapahaka played an important encompassing role from primary through to adulthood, where she performed with Waka Huia. It was from performing in Kapahaka that she found her calling as a vocal singer which soon Hall became a Bilingual singer.

Ria Hall became a blazing new female force on the NZ music scene. Winning awards and critical acclaim, her sound fused furious hip hop beats and richly layered vocals in English and Te Reo Māori, creating an epic soundscape that embraced and challenged multiple genres. Her album, Manawa Wera, was written and co-produced with Laughton Kora, the album is inspired by current political, social and racial climate, one that musically brings together elements of classic reggae and soul. Using her hometown’s history as inspiration for her powerful debut album, Rules of Engagement. The title came from a letter that Henare Taratoa (Ngāi Te Rangi) sent in 1864 to the first governor of Aotearoa, Sir George Grey, outlining a code of conduct for the battle of Gate Pā (Pukehinahina). Both political and personal, the 2017 album established Hall as one of the most thoughtful voices in New Zealand music. She is a powerful live performer, crafting an experience that showcases her enormous vocal range and ability to effortlessly transition between styles. She performed and toured alongside many artists and groups: Hollie Smith, Trinity Roots, Tiki Tane, Che Fu, Laughton Kora, Kings, Fly My Pretties, Rob Ruha, Maisey Rika, Stan Walker to name a few … Her chief aim in Music is to challenge the accounts of New Zealand history, and increaseunderstanding and empathy between Māori and Pākeha by doing what feels good because if it feels good for her then the audience will gravitate to it.

He Tangi Apakura | It's Alright

I Am a Child

Love Will Lead Us Home

Where Did All My People Go

Ria Hall | Features in Dont Dream It's Over - VIDEO

Ria Hall | I AM TV - INTERVIEW

Ria Hall | Watch Over Me - VIDEO

Ria Hall | Where Did All My People Go - LIVE VIDEO

Ria Hall and the NZSO (Napier)

Ria Hall and the NZSO (Tauranga)